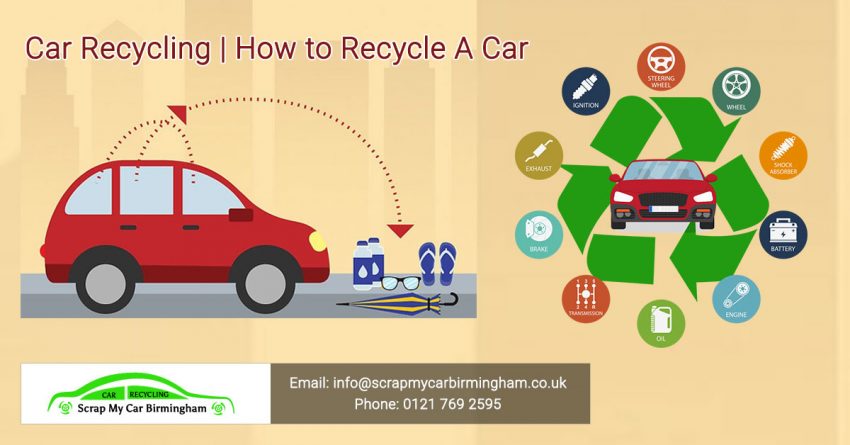 Car recycling is disassembling of car or other vehicles for spare parts. Once in a while when a vehicle (car, bus, etc.)  comes to the end of its existence the only option to do is ship it off. Generally, the industry refers to, Authorized Treatment Facilities (ATF). At the end of their functional life, vehicles have worth as a source of spare parts. This has also produced a vehicle disassembling industry. The industry has many business outlets. You can choose to get your car recycled for the number of reasons it could be due to a failed engine or Ministry Of Transport, vehicle crash damage or else old age.

Many car recycler companies also guide the different steps by which a vehicle goes through when it is recycled in an eco-friendly and safe manner.

Process of Recycling a Car

Once a vehicle will be taken to an Authorized Treatment Facilities (ATF) where it will go through the three stages which are as follows:-

De-pollution:- This activity means having all of the precarious components or materials safely removed as a requirement of the Environmental Agency. It is important because vehicles have many parts with the potential to harm the environment. Coolants, antifreeze, batteries, oil, fuels are examples of poisonous substances which need to be disposed of with care to protect the environment and people both if any of those materials were to enter the food web or water supply it would prepare the array of health-related problems.

Dismantlement:- When the precarious liquids have been removed, the vehicle will be dismantled.

Recycling Catalytic Converters: – Palladium, Rhodium, and Platinum are some of the metals found in catalytic converters. It should only ever be recycled by a trained professional person as once it is opened and mixed in the air it is examined as dangerous.

Recycling Car Tire: – A far as components go tire have always been one of the rigid substance to use for. In their raw form, before they are melted down, tires are also used in roadbeds on race tracks or also on the playground to insulate the soil.

Recycling Glass: – Glass is an unbelievable variable material due to its composition can be recycled over and over again.

When a vehicle gets destroyed there are three processes which come in the destruction which are as follows:-

Magnetic Separation: – Mostly the majority of steel is magnetic so it’s relatively easy to separate from other recyclable material.

Melting: – Once the steel is separated through a magnetic process. And tin is removed through the detinning process; the steel is placed to be melted down.